the black | body, a 2015-16 series of progressive art by black artists from across the diaspora, is the culmination of a trilogy of curatorial projects, beginning with Black and Beyond [2001], which featured the work of three contemporary black dance artists pushing the boundaries and limitations of the ‘black bodies’ as legacy and form. Next was  Studies N Black [2007-8], a progressive series of mini-festivals and events in Minneapolis, Brooklyn NY and Chicago that offered a multidisciplinary offering of black artists who delved into the problematic, stereotypical, emotional or cosmological dimensions of black culture.

the black | body series was initiated in Evanston with my exhibition of archived performance art works, TRIPTYCH: CYCLE this past fall. It now continues in downtown Chicago with innovative artist Dana Michel’s performances of  Yellow Towel at Storefront Theatre this Friday & Saturday February 26 – 27th; part of DCASE/On Edge programming.

As a child, Dana Michel would drape a yellow towel on her head in an attempt to emulate the blonde girls at school. As an adult, she now revisits the imaginary world of her alter-ego in a performative ritual free of cover-ups or censorship. Blending austerity and absurdity, she digs into black culture stereotypes, turning them inside out to see whether or not she can relate. Strongly influenced by the aesthetics of fashion, music videos, queer culture and comedy,  Dana quickly stood out as an emerging dance artist. With Yellow Towel, she explores new creation territories and most decidedly asserts herself as an artist to watch.

Dana will also engage with the public in dialog as part of  Open Dances at Dorchester Art + Housing Collaborative studio [1456 e 70th St] on Saturday, February 27th from 1 – 3pm. She will lead a workshop, An Activator Class in Choreography, as part of Illinois Humanities Art School series on Sunday, February 28th. 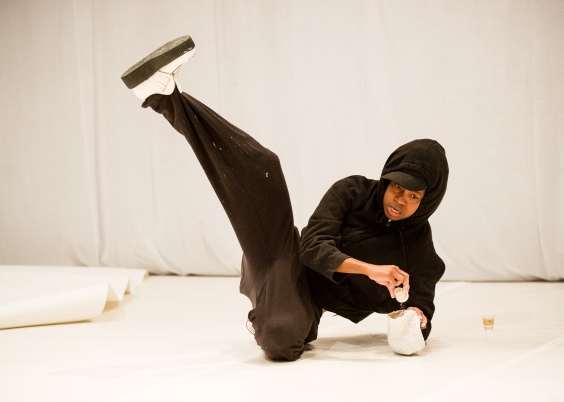 Dana Michel is a choreographer and performer based in Montreal, Canada.  Before entering the BFA in Contemporary Dance program at Concordia University in her late twenties, she was a marketing executive, competitive runner and football player. In 2011, She had the honour of being a danceWEB scholar, allowing her to deepen her research process at ImPulsTanz in Vienna, Austria.

Her practice is rooted in exploring the multiplicity of identity using intuitive improvisation.  She works with notions of performative alchemy & post-cultural bricolage; using live moments, object appropriation, personal history, future desires and current preoccupations to create an empathetic centrifuge of experience between herself and witnesses.  Today, her work can perhaps best be described by its influences: lucid cinematography, living sculpture, physical comedy, psychological excavation, deconstructed social commentary, the bulimic logic of Hip Hop and child-like naïveté.  Her work has been presented in North America (Montreal, Quebec, Toronto, Ottawa, Boston, Salt Lake City and New York City) and in Europe (Austria, Belgium, Serbia & Switzerland).  Inhabiting both traditional & non-traditional spaces is a key component in the creation of her work.

Over the past nine years, her work has been awarded the Montreal Fringe Festival “Best Dance Production” in 2005, the Globe and Mail’s “Best Emerging Choreographer” in 2006, and a “Top Ten Choreographers” listing by the Montreal Mirror newspaper in 2007, 2008 and 2009.  The film version of her solo the greater the weight won the jury prize for the “Best Female Performance” at the 2009 In Shadow International Festival of Video, Performance and Technologies in Lisbon.

One thought on “the black | body : Dana Michel”